Why do people wait for the cliff before they act? 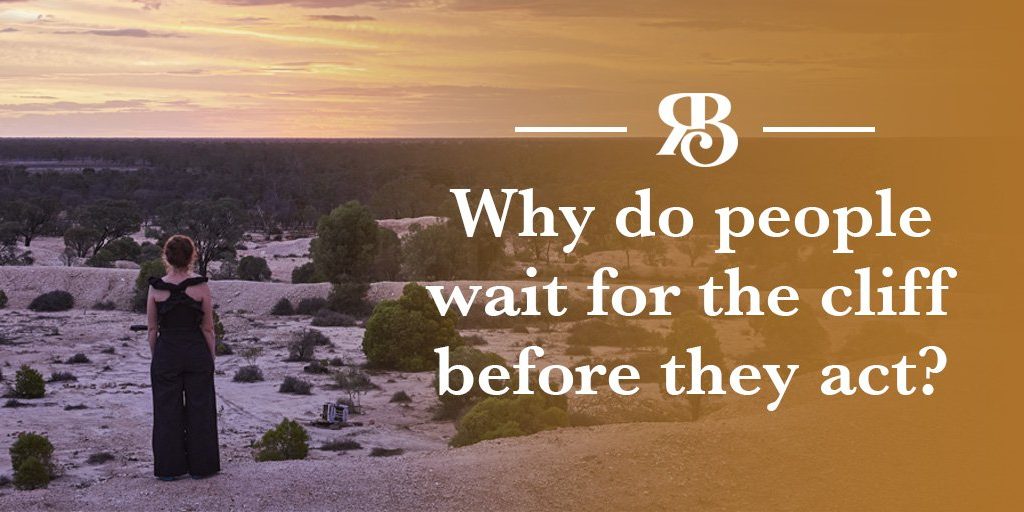 I caught a glimpse of the transformative power of disaster recently when I watched a ‘tough’ older man rendered speechless by tears of appreciation as he shared the story, with an also teary reporter, about the young people in his community who had sandbagged all night to create a levee to save his, and many others, homes from inundation by the breaching river.

They were not out of the woods by any stretch – but this man’s circumstance and pending ‘loss’ had forced him to open up to such a degree that he was overwhelmed with the incredible acts of generosity.

Isn’t that the way it goes so often – we can hold our resolve, be resilient and brave.. until the expression of a single act of kindness brings us to our knees.

This is love in action… a felt sense of open heartedness can bring up a full range of emotions including deep appreciation, grief and sadness and also leave us questioning – how can we be worthy of such acts of love and care (and non-repayable sharing) by strangers?

From that moment – when this lovely man’s heart was cracked wide enough open to FEEL the love – he is no longer the same.

why do we wait until it’s so bad to let ourselves be open to such profound love and acts of service?

One such moment from my own life, was when I found myself in complete surrender to receivership atop a mountain range in the Kimberley.

It was a challenging day, my body was expressing extreme discomfort (it was familiar pain.. But I was unable to apply my usual management tactics while hiking mountains) and I was feeling deep frustration at my body for letting me down and destroying my capable image, to the point where it was becoming difficult for me to walk any further.

By mid morning it had reached a point where we entered into serious discussion about whether I should be airlifted out.

In the true ‘no woman left behind’ spirit that our crew had fostered over the previous days adventures, my peers swiftly and without a care to my protesting, emptied my backpack to relieve me of the additional weight of my gear and showered me with all the valuable contributions I was making and why they needed me to continue with them.

I was brought undone at their willingness to carry MY load..

And I was humbled into receivership.

And we all reached the end, together, in joy filled rapture.

It still raises emotions in me as I write… such was the gift.

In the famous words of Leonard Cohen

‘There is a crack  in everything, it’s how the light gets in’

These moments change us… forever…and yet, we demonize disasters or challenges in our life and we seek safety at every turn to avoid these times….

But I would argue it’s when we do our best work in both giving and receiving?

And wonder… isn’t this what we are made for?

As Sophie Strand so eloquently says:

“becoming new is never safe. Survival is never safe. It is always a breach. A break in the skin. It is a leap across the abyss. It is the moment you leap into another body.

And the real question is…

Why can’t we open ourselves up so fully to receive ALL that is WITHOUT the need for disaster?

And if we can’t, then I wonder still if we need to somehow design ‘mini disasters’ in our lives to collectively activate and inspire transformation so we continue to evolve and thrive…

Humans are incredibly good at supporting each other in times of disaster, despite the personal cost, trauma and difficulty faced, people will generally step up, when needed, to lend a hand and go the extra mile for their fellow humans… and we’ve seen this in spades in the last few years around the world with natural disasters that follow on the heels of more natural disasters, interrupted by a global pandemic and followed by more natural disasters.

My curiosity with this is not in the impulse to act…. It’s in the seemingly obvious inability for us to act when there isn’t a disaster..

Is it an evolutionary flaw we are experiencing when we wait.. and wait… and wait .. until it’s so bad that we don’t have a choice?

Sweeping the evidence under the carpet, waiting until the knight in shiny armor to show up and whisk us away or buy another lotto ticket in the hope of realizing all those dreams?

Individually and collectively it’s mostly not until we reach the knife’s edge that we take action..

When a life threatening diagnosis is shared, when financial ruin is pending, when relationships are at the end of their tether when our home planet is burning and flooding…

I remember being at a conference in my early twenties where the motivational speaker shared a story about a man who had a dog in his front yard,  who was sitting on a stick and wincing and wining in pain – his neighbor asked him – why doesn’t the dog just get off the stick… to which the man replied ‘it isn’t sharp enough yet’…

What is the tipping point of ‘sharp’ that will force us to act…. Or can we rewire ourselves to act before we even get on the stick?

We seem to have acclimatized ourselves individually and collectively to a certain level of discomfort… things are good – but could be great – but to achieve that would risk safety and an expanded capacity to receive… and so we normalise mediocrity with distressing leves of okayness.

And we step over it or demand that it’s someone else’s problem to fix.

It’s how we become blind to poverty or the statistics that are now so big that we can’t even imagine facing them or think ‘what can I do’….

Is it possible for humans to recalibrate ourselves to motivate us to act BEFORE it goes to shit?

What is the belief that holds us back?

What is the ‘tipping point’ of a crisis that will force people to act and how do we design that into our systems so people act well before the crisis ever hits.. Making crisis management redundant?

Or is it just the perception of crisis that is the issue… and we need to reimagine every ‘disaster’ as an opportunity for improvement and a chance to be our best?

Is that why so many fires are lit by firefighters? Or why mechanics drive shitbox cars?

I have so many questions about this…most of which remain unanswered or simply lead to other questions.

But one thing I do know is that HEALING is an entirely necessary and powerful place to start.

“There’s only two things that’s going to save the planet. That’s healing and kneeling. Healing, and kneeling down and giving our thanks to the creator of our life.” – Master Sri Avinash

Not just when disaster is pending but as a habit… I make lists of things that are triggering me, I get curious about what I’m seeing and feeling, where my resistance lies. I apply the healing arts, I ask for guidance –  I continue searching even deeper for the beliefs that keep me stuck, even the ones I thought I had surrendered years before,  I bring my community closer and I give.. as best and as much I can and no more.

I remember that I am ENOUGH.

And I wonder…. How can I build a life for myself that doesn’t require me to face the cliffs edge again?

It’s the view into nothingness and no certainty that we are afraid of most and so… we subconsciously create disaster so we are compelled to DO… all the while it is the calling of our soul into BEING that we truly need to hear… to love ourselves more fiercely simply for who we are and not what we do… to love ourselves despite the hopelessness or the enormity of the task at hand or our lack of control over it.

Healing quels the voice that asks

“Could I have done anymore?”

Our call to bravery is not in facing the disaster – but in facing who we are without it.

Who are we in the abyss?

If our dear friend, the older man who triggered this whole train of thought could know one thing and bring it close to himself as he faces the rising tide of the river that he has no power or control over.. It is that …

We are all love.

And, as the incredible BEatles sung

Because from a place of deep love, appreciation and self worth – we can be and do anything we believe…

If the events roiling the world today leave you feeling hopeless, then your most useful response is not to rail against the world, the tyrants who are destroying it, or your fellow citizens — but to cultivate your sovereignty and take powerful action grounded in love.⠀

If you would like to continue the exploration of WHY… join me in my Mastermind – WHYld Women – https://whyldforwomen.com/